Back in 2003, a group of friends met while working at a PBS station in Washington, DC.

They produced a daily, live, interactive television show that was designed to be educational and entertaining for kids. To blow off steam in-beween seasons, they would take road trips to the different theme parks around the area.

The show was eventually cancelled. To fill the creative void, they decided to develop a side project... a radio show based on the conversations they had while on their theme park road trips.

In April of 2005, CoasterRadio.com premiered as the Original Theme Park Podcast.

The idea was to create a professional sounding broadcast that sounded like the morning radio shows the guys heard when they were growing up.

They recorded in a make-shift studio that Mike created in his living room.  In the early episodes, you could hear cans of beer being opened and snacks being eaten.

The show really was just five friends sitting around talking about theme parks.

Mike, EB, Flava, Mario and Greg figured that the show would last one summer. But after successful on-locations shows at Dorney Park, Kings Dominion, Holiday World and Busch Gardens, the Pennsylvania Department of Tourism contracted the guys to produce a four-part podcast series about amusement parks in the Keystone State.

CoasterRadio.com was also the only unofficial podast to cover the opening of Expedition Everest at Disney's Animal Kingdom.

After 80 episodes, the guys decided to call it quits with the hopes of developing a new podcast.  That new show never appeared, but the CoasterRadio.com website stayed active, posting news and articles on its blog. 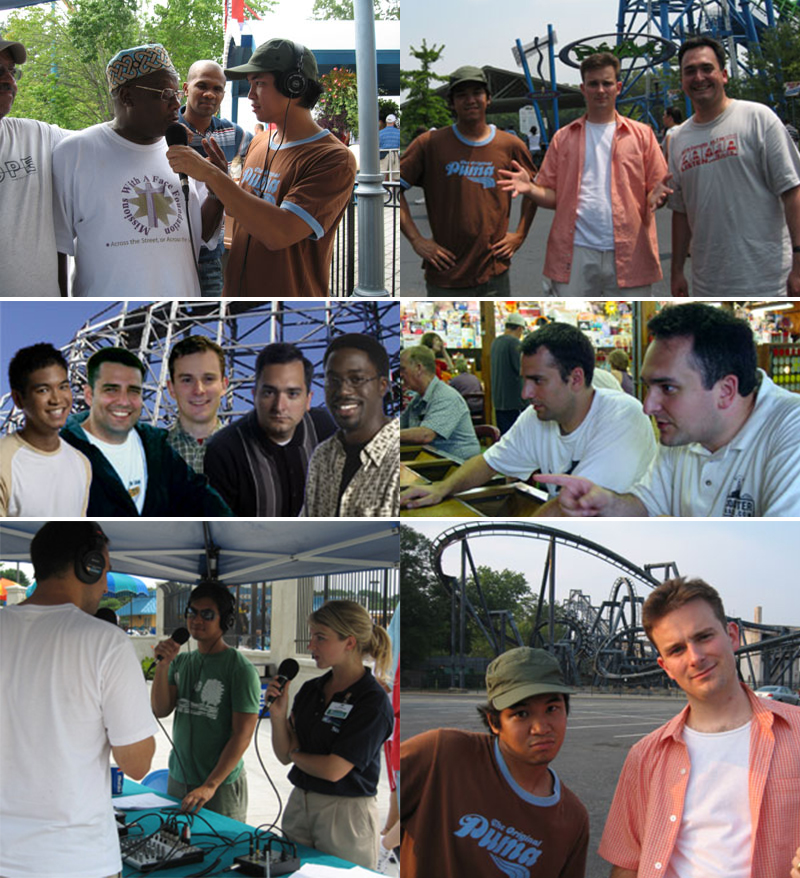 After a three year break, the show returned in August of 2009.

Mike and EB developed a two-host format, with EB broadcasting from Indiana and Mike from Washington, DC.

The show began to experiment with new segments and different types of content.

This included the introduction of a stable of "characters" that were based on theme park stories, attractions or pop culture.

Most importantly, the show began to focus on content provided by theme park fans who listen to the show.

CoasterRadio.com sent listeners to attraction grand openings and invited others to call in with reviews of parks around the world.

They also developed interactive game-shows such as "Theme Park Smarts" and "Know Your CoasterBoy."

In 2010, they started "The Neil Patrick Harris Project." It was designed to attract the well-known actor's attention (because he is an admitted theme park enthusiast) and convince him to become the show's weekly announcer.

With the help of the show's dedicated fans, the project succeeded. Neil not only voiced the opening introduction, but also invited Mike and EB to be extras on the set of the CBS sitcom "How I Met Your Mother."

With the support of listeners through Patreon, the show began to hold "listener meet-ups" at parks throughout America.  Most importantly, the listeners have formed a community of theme park fans with a with variety of backgrounds and interests.

Mike and EB are excited to use new technologies and services to continue the growth of the show. They're looking forward to having the show evolve while remembering that CoasterRadio.com has always been a show were good friends gather to talk about something they all enjoy.

Mike Collins is a television producer in the Washington, DC area. But secretly, he wishes he was a Disney Imagineer.

Mike has worked in radio and TV since 1993 and is really excited to combine his two hobbies - theme parks and broadcasting.

The cynic of the show, E.B. doesn't expect much from your average, poorly maintained, over-crowded theme park.

E.B. isn't satisfied with an "okay" park experience. He's looking for the best fun vs. dollars vs. time ratio. It doesn't matter whether it's an adrenaline rush, a good theme, or funky scenery that keeps E.B. smiling, as long as he has a good time.

The easy-going outdoors-y type, E.B. is the one who'll skip the new gimmick-driven rides and go for the proven classics when he's at a park.

Neil is an emmy winning actor, producer and director.

He became the announcer of the podcast back in 2011 at the conclusion of the year-long "Neil Patrick Harris Project."

Neil invited Mike and EB to be background actors on "How I Met Your Mother" back in 2012.

Subscribe to CoasterRadio.com by using one of the methods below.
The subscription is free and you'll never miss out on the fun!

We need your help

Support the show! There are a lot of ways to help CoasterRadio.com, and some of them won't cost you a cent!